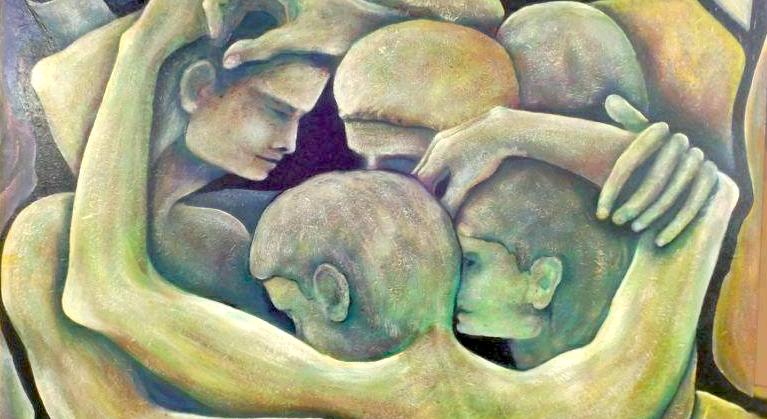 It was in the news a few days ago that the Dutch MEP Rob Roos, during a meeting in the European Parliament, asked the Pfizer representative Janine Small this question:

‘Was Pfizer’s covid vaccine tested for stopping transmission of the virus before it was put on the market? If it was not, please say so; if it was, are you willing to share the data?”

He received this answer:

“Regarding the question of whether we were aware of stopping immunisation before market launch, well, no, we really had to move at the speed of science to really understand what was going on in the market”.

This admission alone – it is not the first and will not be the last – should be enough to put a tombstone over the lawfulness and scientific nature of the indiscriminate injection campaign, based on totally false motives, as confirmed by an official of the manufacturers of the serum in question themselves.

"Get vaccinated for others" was always a lie.

The only purpose of the #COVID passport: forcing people to get vaccinated.

The world needs to know. Share this video! ⤵️ pic.twitter.com/su1WqgB4dO

In other words, if the jab – by the manufacturer’s own admission – was unable to stop contagion, its being compulsory and all the shameful passes linked to it, not only make no sense whatsoever but become a symbol of hateful authoritarianism based on a blatant lie.

It is useless to continue spilling rivers of ink – albeit a virtual one – on this unspeakable affair. Things are simpler than one might think; we know that in order to be able to impose forced vaccination as it was done, two things were necessary:

1- No effective treatment for the disease would have had to be available;

2- The vaccine, in order to be one, would have had to prevent infection and contagion.

As we know, neither of these conditions were met and therefore what happened – it is pointless to beat around the bush- was a crime against humanity.

And that was the first point.

The second is that in spite of news like this – which of course has been all but ignored by the mainstream press and was ‘debunked‘ by the usual suspects – collective hypnosis is proceeding by leaps and bounds. In spite of the fact that in every family or circle of acquaintances or friends there are now people who have been damaged even seriously by forced jabs, we still witness in amazement the inability of most people to ask themselves a very simple question:

“But if John Doe or Joe Bloggs or Fred Nerk had fallen ill with a disease that they had never had before, but which manifested in a large number of previously healthy people, and if the common denominator for all those people was that they had undergone inoculation, could that not be the cause?”

Maybe it won’t turn out to be the case, and we are the ones who are thinking wrong, but – I repeat – how is it possible that the ‘silent majority’ no longer even has the ability to ask a simple question?

Is it possible that the taboo against being able to even imagine that institutions, the media, and the medical sector do not necessarily work for the good of the population is something untouchable?

The silent majority is a docile herd lined up for slaughter.

And now to the third point.

Something positive has also come out of this global dystopia. As Fabrizio de André [Italian singer-songwriter, 1940-1999 Author’s Note] once sang

“from diamonds nothing is born, from dung flowers are born“.

And they have been born.

They are the flowers of the awakening of many brothers who over the months realised that things were not as they were being told they were.

Yes, because blood is precisely the key to everything.

Blood is the vehicle of life and also of the deepest human individuality, – the I – the mysterious ‘fluid’ that flows through our bodies.

Through the blood, the human inner world opens up to the outside world, and through this it absorbs oxygen, our vital substance. By absorbing oxygen, the blood renews itself.

Remember the blood clots found in autopsies and the lack of oxygen in the sick?

Now it is precisely the blood that was the target of what it is impossible not to call an attack upon Mankind, either through a disease that attacked its essence or through an experimental serum that poisoned its substance.

By means of the blood, and thanks to oxygen coming from the outside, we form our bodies according to the image of our inner life and we experience perception of our individuality, of our ‘I’. The energy of the blood is directed inward by building our body’s structure and outwards by absorbing the oxygen that is essential to our life processes.

Help in understanding the deeper meaning of current events is provided by Goethe‘s masterpiece, in which he tells how Faust, the symbol of modern Man, makes a pact with Mephistopheles, the expression of Evil.

Now, Faust must make a contract with Mephistopheles using his own blood. At first he thinks the request is just a joke, but Mephistopheles is terribly serious and gives him a very peculiar answer:

“Blood is a very special fluid“.

Now this statement leads us to understand something extremely significant, namely that

whoever takes control of the blood of a man is in a position to control him. 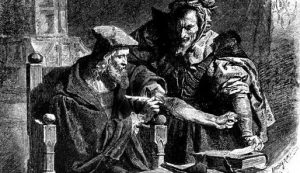 We understand then that if blood is indeed ‘a very special fluid’, it is so because it represents the battleground in man’s earthly life in the choice between Good and Evil.

Just think of all the forms of ‘agreements signed in blood’ made between members of secret societies or criminal brotherhoods.

Rudolf Steiner bluntly states in this regard:

“The sagas and myths of all peoples tell of this and state: that which has power over your blood, has power over you too. Whatever power wants to take possession of a man, it must act upon him so that its action manifests in his blood. If therefore an evil power wants to influence a man, it must have control over his blood. This is the profound and spiritual meaning of the Faust passage ‘Blood is a very special fluid’. That is why the representative of the evil principle says: sign the agreement with blood, for if I have your name written in blood, I have a hold over you in that through which man can be seized, I have drawn you to me’. (Rudolf Steiner, Blood is a Very Special Fluid)

Let us read two sentences from this Steiner quote again:

While I leave the answer to this question to each person’s own assessment, there is one final aspect – this time a positive one – on which I would like to dwell.

In the course of the clash between Evil and Good in which we are all still caught up, those who have not allowed their blood to be poisoned have nevertheless learnt to recognise each other.

We discover – more and more every day – that we recognise each other on sight.

We feel that we are brothers, ‘blood brothers’ with those who have been able to make the same choice as us.

That of defending one’s own blood.

And this is the light-filled part of this story, which allows us to hope for a new world, for a New Man.

Where blood is once again the ‘cypher‘ for our remaining human. 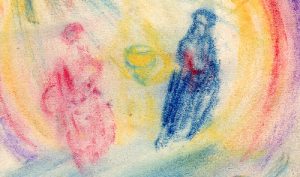 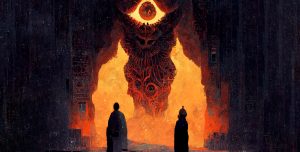 Chi è Michele per me?